Search for a Book or Article 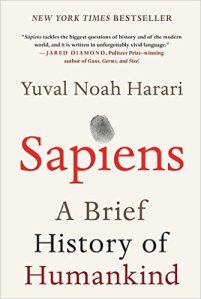 This book was chosen to be the first book read and discussed in an online non-fiction book club I recently joined – and I’m glad we did choose this one!

The book is an overview of homo-sapiens as a species, and how we have changed over the ages, and what we have done, before finally touching on where we are going.  As such the book is a cross-pollination of history, sociology, and economics.

As you may expect from a book with such a broad scope, there are some sweeping statements, and rather than being a neutral dispassionate account, Harari makes his opinions very evident.  However rather than being irritating, I feel this makes for a more entertaining read.

The book begins by introducing the theme of homo-sapiens in the context of the presence of the other human species that used to exist.  He then goes on to describe the cognitive and agricultural revolutions.  Then it’s the establishment of patriarchal social hierarchies across the world, largely based on historical conventions.  Next Harari states that the purpose of religion is to unify fragile societies with superhuman legitimacy.

Harari then moves on to the scientific revolution, describing how an admission of ignorance by Europeans, along with a desire to discover and conquer new lands was key to the movement.

The conversation moves swiftly then to economics, using the fact that a bank can loan £10 for every £1 it has, to argue that our economics is based on trust in the future.  Harari states that a country’s credit rating is more important than its actual resources.  Harari describes capitalism and consumerism as being 2 sides of the same coin with two commandments: rich must invest, the rest of us must buy.  Consumerism, he says, aims to convince people that indulgence is good and frugality is self-oppression.

Harari also argues that, now, instead of relying on local communities the individual relies on the market or the state.  Parental authority no longer sacred, he says, and state intervenes.  And so when Harari asks if we are any happier now than when we were hunter-gatherers, he argues that our rise of wealth is offset by the disintegration of community life.

Harari also speaks of ecological degradation and our tendency to treat other species as a means to an end, for example, the farming of cow’s and chickens has cut years off the lives of both, since they are killed as soon as they reach their maximum weight.

In the final chapter, Harari speculates on the future of mankind.  With improvements in medical knowledge comes new ethical conundrums, he says.  How will we handle the options of genetic engineering?  What will the advent of artificial intelligence mean for humanity?

In my book club, we found that the book generated a lot of talking points.  What would the world be like now, had the other species of humans survived?  Why have so many cultures across history and the world had patriarchal hierarchies?  Can societies improve over time, or is one style better than another?  Can communism be considered a religion?  Are human rights really just a figment of our collective imagination?

Whilst not everyone in my book club enjoyed the book equally, I would say that it’s as enlightening as it is thought-provoking.  By the end, it was hard to argue with the author’s conclusion that homo-sapiens are like dissatisfied and irresponsible gods.