Search for a Book Review 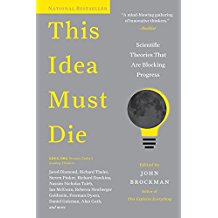 There’s nothing like reading a popular science book to make you feel more worldly wise!  The Idea Must Die is a compilation of over 150 separate articles, by different contributors, arguing that certain scientific concepts are blocking progress and should be put to rest.  Its scope is very broad – at first I felt the book was concentrating on physics, but it later went on to include psychology, linguistics, genetics, criminology, economics and computer science.  The title of each article comes from the concept that it is argued should be put to rest.

There were plenty of articles I found interesting and learnt from, including: – “Long-term memory is immutable”, “One genome per individual”, “Economic growth”, “Intelligence as property”, “Continuity of time”, Knowing is half the battle” and “Information overload”, “Essentialism”, “Malthuanism” (which is the idea that population will outstrip food supply).

For the majority of the articles I agreed that the theory should be put to rest, and plenty that I thought it was good to see included.  These included topics such as: race, nurture vs nature, reductionism.  Cancer research theories were also addressed.

There were several topics I was surprised to see argued against, such as evidence-based medicine, scientific method, evolution, carbon footprint, string theory, culture, and science being self-correcting.

It was refreshing to see “We are stone age thinkers” but I was disappointed to see the title “Languages condition worldviews”.  It was also a shame to see AI there, along with robot companions.  Ideas in some chapters were disconcerting, claiming there’s no self, no cognitive agency, and no free will.

There was a potentially useful article entitled “Scientific knowledge structured as literature” suggesting how publication could move to a newly updated method.

With each article ranging in length from a mere 1 to 7 pages, it is an incredibly easy book to dip in and out of or to fit around a busy week.  At times there is a flow between one chapter and the next, but not always.  Several of the articles proffer conflicting viewpoints, prompting the reader to reflect and wonder.

Some articles are more-well written than others, and similarly, some arguments are more strongly put forward.  Usually, only one argument is made per article, but at times there were several.  I believe some of the articles were chosen for their brevity, which is a shame because some of the articles could use a stronger argument.  Some articles are hard to get your head around.  The language is not always accessible and often presumes reader already has some knowledge of the subject.  Although intriguing to begin with, with so many articles it began to feel dry and laborious at about 60% through.  Some articles I deliberately skipped, others I attempted but found impenetrable.

It’s a refreshing read if you haven’t picked a science book in some time and it’s definitely a thought-provoking read if you feel confident that you can get to grips with the material.